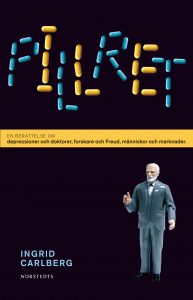 The pill is a story that takes the reader from Sigmund Freud’s tribulations in fin de siècle Vienna to promotional strategies and marketing plans in today’s multi-national pharmaceutical companies. It is a depiction of the scientific genius traits,ideological battles between “pills and talk ‘and companies’ clever tricks in the game market for pharmaceuticals billion.

For this book Carlberg was awarded the investigative journalism award The Golden Spade in 2008.

“It was a long time ago I read a fascinating piece of contemporary history. Ingrid Carlberg raises rarely voice, it is not necessary. She does not take sides in the conflict between talk therapy and SSRIs, she manages to show both its strength and its weakness. It makes the book a textbook example of successful investigative journalism. “The Pill” combines dissertation respect for facts with thrillerns entertainment value."

“Ingrid Carlberg’s “The Pill” is absolutely brilliant. When the author mastered the subject so thoroughly, as she describes it as lucidly without oversimplification, and not least when the story itself is so exciting, is reading a pure and unadulterated pleasure.”

“Ingrid Carlberg shows with overwhelming research and curious neutrality to disease and treatment is primarily a förhandlingssak.”Aase Berg in Expressen, 31 March 2008″One of spring’s most important non-fiction books.” Ola Wihlke, Norrköping Newspapers, April 1, 2008.”Carlberg addresses issues with ethical and existential firepower in an exemplary nuanced and restrained manner.”

“We’ll see you in the crowd at the pub. Malin has heard about my book and says she is one of them I write about, but not for long. She says she thinks she can thank the medicine that she really standing here today, but now she is trying to quit, cut the tablets into small pieces and decreases slowly, slowly. She cups her hand around my ear, screaming to drown out the music: